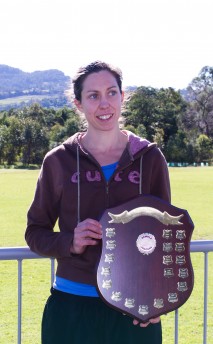 Presented to the overall winner of the Kembla Joggers Half Marathon. In memory of the late Tom Miskelly, a former KJ, gutsy athlete and great supporter of the club. First presented in 1992.

The longest race on our winter calendar is the Tom Miskelly Memorial Half Marathon. The race hasn't always been run on the same course as back in 1989 the race was run on an alternate course for one year. This course incorporated much of the existing 10 mile course. Mark Everton's winning time of 72.39 on the alternate course still remains the fastest time run on either course.

In 1992 the race was dedicated to the memory of popular KJ Tom Miskelly who passed away in early 1992 at a young age. Tom was a great supporter of the club through his business Discount Bikes and donated prize money to our Athlete's Athlete award which business partner and mate Brian Wilson has generously continued. Brian and Peter Evans, another of Tom's mates, donated the Tom Miskelly Memorial Shield and provide the trophies to the winners each year.

Tom lived his childhood years at Albion Park and after riding his horse to the local primary school graduated to bicycles, whereupon a lifelong love of bike riding developed. Rides to Oak Flats High became mini Tour de Frances which was good for Tom but hard on his schoolmates. While working as an electrician he became an accomplished A grade rider and rode in over 40 Classics such as the Goulburn to Sydney. In the early 80's he became interested in triathlons and competed in many of the early contests all over NSW and came in the top 10 in the Triple M Long Course Triathlon at Manly. He then completed many fun runs and half and full marathons. Around this time he purchased the Keira Street bike shop off the Wilson family and became well known for both his friendly approach and his mechanical skills. He maintained a keen interest in running and in particular the longer races. Sub 3 hour marathons and sub 77 minutes for the Half marathon were common. He liked the short races but loved the longer ones, which is why the KJ Half Marathon was chosen to be his memorial race.

The first running of the half marathon in 1988 saw Mark Everton win the race in good style from Brendan Scollary and Gary Pearson. The women's race was won by Michellie Jones in 89.41. Yes, this was the same Michellie that went on to win 2 World Triathlon Championships! In 1989 the race was run on an alternate course and Mark Everton completed back to back wins in recording a blistering 72.39. Anneli Laajoki took out the women's race in 90.36. In 1990 Petri Laajoki set a new course record with his time of 72.48 which still stands as a record today. Veteran Mary Murrison blitzed the field and the old record in recording 83.46. 1991 saw Mark Everton return to the winner's circle. Tania Connor went one better than the previous year winning from Amanda Meredith.

In 1992 the race became the Tom Miskelly Memorial Half and a big crowd ran in respect of their late friend. With the big guns Petri and Mark not competing, George Osadczuk won in a close finish from Garry Wheeler and Geoff Stalker. Triathlete Joanne Hall won the women's race. Mark Everton made it 4 wins in six years by taking out the 1993 event in a blistering 73.04. Olympian Kerryn McCann took out the women's in a record time of 81.08. Petri made up for his 3rd placing the year before by winning a close race from new KJ Gary Burton and Ian Kennerley in 1994. It's strange how some things turn out, before this race started Petri and Ian were overheard saying they were just going to jog the race! Nice one fellas. Louise Samuel took out the women's section from Kym Batten.

1995 saw Petri complete a hat-trick of wins. Chris Stocker, in a preview of things to come, was 2nd home. Karen Blay won the women's from Paula Crinnion. Chris Stocker's gradual improvement saw him record his first win in this race the following year. Mark Everton was 2nd and Garth Hennessy 3rd. Paula Crinnion went one better than 1995 in winning a close finish from Carrine Weston. The battle between these two was one of the classics. In 1996 Chris Stocker completed back to back wins in a very fast 73.23, the 5th fastest time ever on the course and a big PB too. David Pomery was 2nd in his first KJ Half appearance. The women's race was keenly contested with Karen Blay outlasting Paula Crinnion to record her second win in this race.

Winners of the Tom Miskelly memorial Half Marathon: