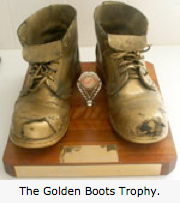 The winner of Most Meritorious Award receives the prestigious Golden Boots Trophy the feature of which are Fred Zatopek's legendary boots. The award recognises one or more performances by an club member which are considered to be of significant individual merit. Unlike the Kembla Joggers Medal, the performances do not necessarily have to be in a club event.