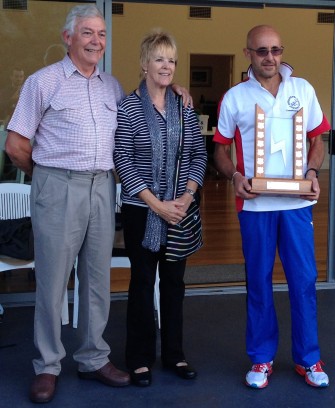 Presented to the winner on handicap of the annual 10 mile (16km) event at West Dapto. This is the event held in memory of Andrew Godsman who passed away suddenly in 2002. Andrew was a great clubman, a great person and a great friend to many club members. The KJs meant a lot to Andrew and the 10 mile was one of his favorites, being the first club race he ever recorded the quickest time on the day.

The following memories and words appeared in our June 2002 issue of The Fox ...

The club was deeply shocked and saddened by the sudden death of our friend and loyal club member Andrew Godsman last month. Andrew had been a KJ for over 5 years and during that time he had forged many friendships within the club. He was a top bloke and for me personally it had been a pleasure to know him for that short time. I will always remember our 3-day relay from Bathurst to Wollongong a few years back with Gary, Phil and Sharkie, and the 3 months we all spent training in the sand hills in preparation for Dave Taylor's race across the Simpson Desert. What a great guy he was. And what a great athlete too. His range of athletic abilities, from sprints to ultra distances, was staggering. The turnout of KJ's at his funeral service was impressive and I know his family was moved by this. G-Man, you will be sorely missed by us all and will forever be in our thoughts.

What can you say? How could it happen? Why? What words can describe the loss of Andrew Godsman? The tall, gentle, longstriding guy with a love for running has departed from our ranks, floating away into the ether without a chance to say goodbye. We will all remember him in our own way even if memories dim with time. Mine will be of him, only six weeks ago at Canberra, coming up the final straight in the pouring rain, giving me a high five, as he approached the finish to win the KJ's Marathon Championship. I chatted to him at the picnic day at Cataract Dam two days before he died. He was there to do his job as a marshal. Reflecting on the club's chances of winning an open men's ANSW championship, his words matched the sort of guy he was … "Yes, with Ben, Russ, Micale and Stephen Locke I might not even make the team. That would be great though … I wouldn't mind … the club comes first and if we can take out the open teams this year that's all I want … I'd really like that." Yes, typical of the guy. I remember him turning up at the inter-club challenge a day after winning the Fitzroy Falls Marathon to help the club muster the numbers. No excuses except … "my legs were a little tired coming up the steep hill after the turn". No doubt about it, he was a great clubman.

It was with great sadness that we saw the recent passing of the G-Man. As evident from the number of teary-eyed KJ's at Lakeside, the G-Man was a well-loved and respected gentleman. Without dwelling on this subject, there has been much positive acclaim about Andrew's deeds and characteristics that make us remember him as a "good bloke" for that is what he was. The time to go is never right when we say goodbye but I think Andrew has left us all with something to think about, something positive that we can gain from his time here. Regardless of our spiritual beliefs and followings, we are faced with the fact that none of us are immortal. We are not on this earth forever and one day we too will depart. It will happen to me and it will happen to you. So, perhaps while we are here we shouldn't waste a day in our life - we should plan that something we have been putting off, or go that somewhere we have wanted to visit, or maybe strengthen the friendships and love we have for those who are close to us. We might not be here tomorrow and life we should live. Andrew certainly did.

Mum called my mobile as I walked to work on Wednesday morning. Since then I have hardly ever not thought of Andrew Godsman, of all the good memories. Because of course we are all acutely aware of the fact that this is a terrible tragedy, but isn't it better to think of the good things. I remember some great times we had together, like the 2 Hopetown Relays in a row when we had our bikes and rode alongside during each others run leg, encouraging each other to do our absolute best for the KJ's. Particularly in 2000 when the G-man covered each of the 12 legs either cycling or running and I covered 11. I remember the almost cancelled 1999 Callala Half Ironman, just before Christmas, when we ran in Santa hats, and waved to the crowd, and the time we marshalled the KJ anniversary 9-mile, getting mud all over his car and blasting music for the runners from his car stereo. I remember many trips to Rusty's on a Thursday night, including the night he met Christie. The 1st Fitzroy Falls Marathon, a week after Melbourne, when we ran together, but the bugger felt good and took off. The next year he went back and won it. The massive bowls of pasta we used to eat at home, our first marathon in Canberra 1998, the mammoth stretching sessions, the Olympic opening ceremony party at Robs house in Sydney, the countless long training runs along the cycleway, popping in to see him in his office near me at CRM, his love of the weather and the time he drove to Robertson one night in snow and ice, to get photos of snow at Robertson, a place he loved, and bought property in just recently. I have so many great memories and they will never fade. Although I'm overseas I was always looking forward to that time in the future when we'd be back training together, something we discussed again when I was home briefly at Christmas. I'm really going to miss you mate. We all will. You're a good runner, a good person, and above all, a damn good mate.

I first met Andrew about 6 years ago. Both of us were new KJ members at the time and we started a friendship that lasted 100's of km's. Over time our training started to become more and more consistent, running at Lysaghts Oval on Monday and Friday evenings with Bill Williamson and co and meeting every Wednesday afternoon at Windy Gully Mt Kembla to run the 9-mile. Whether it was freezing cold or stifling hot, Andrew would always be there. Our many long runs became longer and we always talked and joked the hours away. Our longest run was on the Australia Day Long Weekend a few years ago when we ran a relay from Bathurst to Wollongong with Sharkey, Gary Howard and Neil Barnett. We ran in the day and had many beers at night. We also did the Kiama-Jamberoo- Wollongong run with Dave Taylor and crew. Andrew would always give his all regardless of whether it was a short or long race. He never had a bad word for others, only ever encouragement, and when he asked you how you went in your run he really meant it. Marathons beckoned him - a total of 10 in fact. This year he won the KJ Gong Run in a time just under 2 hours. He then went on to win the KJ Marathon Championship which was incorporated with the Canberra Marathon. The conditions were atrocious - freezing cold and torrential rain, but the hardyards Andrew had put into his training saw him power home. His time was a PB of 2.47.36 and he still had the energy at the end to cheer on many of the other KJ finishers as they crossed the line. The G-Man loved his running and was a great Club person in every way. He was always willing to represent the KJ's no matter what. The day after winning the Fitzroy Falls Marathon last year, he ran for the KJ's at the Club Challenge. It is also worth mentioning that the week before winning at Fitzroy Falls he ran a 2.49 PB at the Melbourne Marathon. He was dependable at ANSW events too where he rarely missed a chance to wear the club colours. Just 10 days before he died, Andrew won a bronze medal as part of the KJ Open Mens team at Holsworthy, running a sub-35 minute 10km. Not only was long distance Andrew's thing but also the shorter distances, right down to sprints. His speed was exhilarating to watch. It may surprise some people to find out that Andrew holds the KJ Open Track Records for 100m, 200m and 400m. It is likely that they will stand for some time yet. Track work became part of his staple diet and complemented his distance work. He loved Tuesday arvo track sessions and was also a regular at our Thursday night track races. G-Man was the runner you would see everywhere. He was always out there training, usually somewhere between Keiraville, BHP and Blackbutt. That long loping stride just gobbled up the km's. I am sure that he will soon be lapping the other angels in heaven. It was very hard to keep up with him. He was set for a huge year personally and with his running. The G-Man is and always will be a GREAT-MAN, a GENTLE-MAN, and truly a GODS- MAN.