Awarded to the winner on handicap in the annual 9 mile event at Mt Kembla. In memory of the late Eric Brown, for his lifetime of contribution to the club. Presented 2014 onwards. 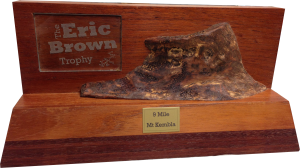 This trophy celebrates the significant contribution made to the club by life member and former Vice President, the late Eric Brown. Presented to the winner of the iconic 9 mile we can think of no better race to run in memory of Eric, on what was his favourite course, inspiring him to become a serious runner many years ago. Footnote - it might be our most arduous event but Eric’s favourite sight the ‘Hollywood Finish’ will be expected from all weary runners down the final straight.

The Eric Brown Trophy is built locally out of woods sourced locally from the area and which can be found on Mt Kembla. The trophy displays a wooden silhouette of Mt Kembla as seen from the South West. The trophy was constructed by members of the Illawarra Woodworkers Group.

The 9 mile is perhaps the race which KJs identify most with. Many will say you're not a Kembla Jogger until you have run the 9 mile, the more strict also add without walking. The race is easily the toughest on our program but this rarely deters a KJ from taking it on. The gut-wrenching 'Big Hill' and the many other hills are features which are pushed aside by the natural beauty of the bush setting which the 9 mile passes through. It is a real achievement to complete the 9 mile, much the same way as it is to run a marathon or City 2 Surf. The 9 mile event has always been held from the normal Mt Kembla venue. In 1995 it ran on an out and back course through Kembla Heights to the top of the Big Hill to avoid traversing Sydney Water property.

“Mt Kembla ... The smell of the gums, the sounds of whip birds, wallabies and wombats running across your path or just sitting staring at you. It is an incredibly mystical & inspiring place to run & will forever remain very special in my heart”. Eric Brown 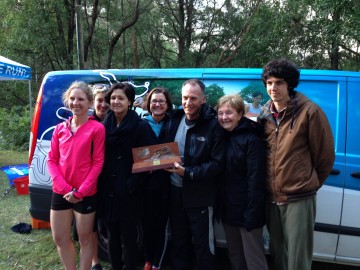 2014 Winner Garry Wheeler with members of the Brown Family