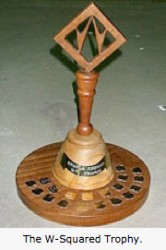 First awarded in 1996, the W-Squared trophy is presented to the winner of the handicapped final of the annual W-Squared 3,000m Track Series held at the Kerryn McCann Athletics Facility (Beaton Park).  The trophy was the "brain child" of long time committee member and life member Bill Williamson.  Bill designed and made the trophy.

The Flying Fox Trophy is presented to the winner of the Junior 1,500m final of the accompanying series which is usually held on the same night. The Flying Fox Series was first conducted in 2004.

The series usually takes place mid-year and athletes must compete in the preliminary races over the preceding 3 weeks to be eligible for the final.