Born in Maitland in 1928 Dave was the first world class athlete to run with Kembla Joggers. At school, at age 16 he won every event from 100yds to 1 mile. His first success at state level was in the half mile in 1954. Due to injury he switched to distance and soon was winning 10K events. In trials for 1956 Melbourne Olympics he was selected to run 5K and 10K races finishing seventh to V. Kuts. He expected to do better in the 5K but he was replaced by J. Landy who later withdrew leaving Dave disappointed at not being able to compete.

Returning to Wollongong he was persuaded to not retire and subsequently represented Australia in the 6 mile and marathon, both of which he won despite being a complete outsider. He recorded a new record in the marathon of 2hrs 22mins 45.6sec.. Thus encouraged he returned to Sydney to run the world's second fastest 6 mile time clocking 27:52.8 which was only 5 seconds outside the world record.

After winning the Australian 6 mile and 3 mile Championships he was selected for the 1960 Rome Olympics and came away with a bronze in the 10K. He followed this with a fifth placing in the 5 mile. Due to an infection he was ruled out of the marathon. 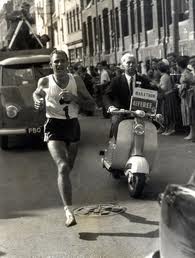 Following this in 1961 he went to England to win the British 6 mile Championship and followed this with wins in NSW and Australian Championships 3 mile, 6 mile and marathon. These wins guaranteed him starts in the 1962 Perth Commonwealth Games where he won Silver in both events. Also at age 39 he won the NSW Marathon.

Dave's career then was put on hold until 1972 when the running boom occurred and veteran's running really took off. As expected Dave was successful in most races in which he competed.

In 1973 he was invited to run around our 9 mile circuit at Mt. Kembla and he was sufficiently impressed to run with us when his job commitments permitted  (this run is described in detail in Kembla Joggers 25th Anniversary Book). His advice and encouragement helped out more gifted runners to achieve their goals.

In the marathon, a race widely regarded in the 1950s as the preserve of failed track runners and madmen, the Australian national reputation started and ended with a single race ... Dave Power’s gold medal run through the unlovely streets of Cardiff, Wales.

Power, a bank clerk from Wollongong, NSW, was, like Elliott and Thomas, a disciple of the unorthodox, inspirational Victorian coach Percy Cerutty. Then thirty, Power prepared for the 1958 Empire Games running on beaches, sandhills and around a cow paddock. He started in the Cardiff marathon with blank references in the event and appeared flattened by his effort in winning the six miles gold medal five days earlier. In his only other marathon, that year’s Australian championship, Power had failed to finish because of severe blisters, a problem that had also bedevilled his track career. South African Johannes Barnard and Englishman Peter Wilkinson had the times and competitive records to fight out the gold medal contest while Power and his fellow NSW runner John Russell appeared to be among those making up the numbers in a field of twenty-five. No Australian had won any kind of marathon medal at major games. But Power, a short yet leggy man with a typical Australian crew cut, hid a fighting temperament behind a quiet, self-effacing manner. He said, ‘I knew when I won the six miles I would have a good chance in the marathon. I entered the three miles to throw everyone off the scent. When I finished way back (seventh in the best time of his career!) then everyone thought I had no chance and no one was looking for me. That’s the way I like it. I prefer to start as the underdog.’

Power took things quietly as the field moved out over a series of hills to the fringe suburb of Rumney. After 15 km his feet began to blister and he was running with pain. But the others could not have suspected his inner struggle as he moved steadily up on the leaders. He remembers, ‘I thought of my wife and kids and tried to forget the pain.’

At 16 km, with the race moving into a downhill phase, he pushed himself up to third place. Two kilometres later he passed Barnard to go into the lead. As the road swung along the edge of the Bristol Channel, Power’s shoes were squelching with blood but he drove into one of the surges that had broken the field in the six miles (9.5 km). He opened an 80m break on the South African but ran into another problem: police, race officials and media people were cruising ahead of him in a fleet of cars discharging exhaust fumes straight into his face. Still, he held his advantage over Barnard from the 24 km point until they were within sight of the stadium. The South African, who had built his stamina running in the gruelling 90 km Comrades’ Marathon in Natal, then began a brave attempt to run the Australian down. The gap narrowed to 20m as they entered the stadium and the roar of the crowd poured down on them. By later standards Power was not properly prepared for a fast marathon, but he held off the tough South African to win a magnificent contest in 2:22:45, more than eight minutes faster than the Games record set by another Springbok, Johannes Coleman, back in 1938. Barnard was second in 2:22:57, Wilkinson third in 2:24:42 and Russell came in eleventh.

Medical orderlies caught Power as he collapsed across the finishing line, utterly spent. They were shocked by the state of his feet when they removed his bloody shoes and he had to be carried to the victory rostrum. With the need to keep punishing himself gone, he could no longer bear to put his tattered feet on the ground. A week later, he still could not walk normally.

Two years afterwards, Power made the 10,000m his main mission at the Rome Olympics. After winning the bronze medal, he toured Europe with a squad of New Zealanders and was greatly impressed by their coach Arthur Lydiard who prescribed heavy mileages but less intensity than the Australian guru Cerutty. Power said, ‘Lydiard has achieved great results with his strenuous training methods. It is a tough routine with a long build-up of distance running. He insists that his athletes - even Peter Snell, a half-mile runner - run over the twenty-six mile marathon course at least once a week.’

He began corresponding with Lydiard and bulking up his mileage. It agreed with him. By 1962, when he was approaching thirty-four, Power finished third in the Commonwealth Games selection race and joined the winner Keith Ollerenshaw of NSW and Victorians Ian Sinfield and Rod Bonella, a training partner of Ron Clarke, in the Games team.

Power saw Perth’s summer heat as an ally against Games competitors from temperate climates and showed he was not above squeezing a bit of psychological advantage from a patently foolish marathon starting time of 3.40 p.m. when he said ‘That time suits me right down to the ground. I don’t care if it is hot. I like a bit of heat.’

The six miles was his first event and he decided to run it aggressively to shake off the fast-finishing Canadian Bruce Kidd. A mile from the finish he threw in a surge that scattered the field but Kidd managed to stay in contact and was too fast over the final lap, winning in 28:26 to 28:34.

Power felt he had made a tactical error by leaving himself with too few reserves at the end of the race, but he over-corrected in the marathon. He and Englishman Brian Kilby ran together to the 30 km mark when Kilby accelerated. Power decided to let him go in the belief he would wilt in the heat. Kilby’s spirits lifted as he easily opened a 500m lead and he was out of sight of the rest of the field for long periods. Power explained, ‘I under-estimated Kilby’s ability to stay and let him go it alone. But I let him get too far in front and left myself an impossible task.’

Power passed runner after runner as he recovered from a bad spell and chased Kilby home, but he had to settle for his second silver medal of the 1962 Games, while Bonella took the bronze and Ollerenshaw was fourth. It was a disappointment for Power, but a new level of achievement for Australian marathoning with three of the top four places in a major event.