It has to be almost 30 years, although in admitting this I feel older that I have ever felt!

My relationship with the Kembla Joggers club, the individuals who have made this club what it is today and always has been, in conjunction the environment around the Illawarra is present in just about every core value that I possessed as an athlete and now in my personal and professional life.

I was introduced to running through school and through our family holidays to the Jervis bay area at a young age. Initially I took the traditional pathway of competing with Illawarra Blue Stars with my peers and those who had a desire to run competitively with Athletics NSW but quite quickly I was introduced to the KJ’s through my father Ernie and an acquaintance of his, Col Tinsley and this is how we came to begin running laps at Lysaght Oval, Figtree and laps around the favorite roads of Mt Kembla. This commencement of my relationship with the Kembla Joggers is far and away my best memory of running and participating in sport. 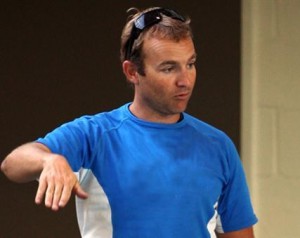 As a young impressionable male the significance of the people whom were to become role models and mentors is something that I will never be able to fully appreciate, I have no idea where I would have ended up in life had I not managed to offset the turmoil of growing up in a surfing culture by running and competing with a group of individuals who were by far my senior. The Browns, (All of them, in laws included), Jimmy H, Bill W, Tony Mac, Kevin O, coops, Wendy B, Drew, Simon Suter, Dave Pomery, Mark Everton, Roberto Rojas the list is endless of people who not only did I inspire to run like but more importantly be like! I may even take credit for getting Neil Barnett into running and I would like to think that something I did or have done has given something back to this rich list of Kembla Joggers or that one day I will be in a position to do what they did for me. I am often asked what made me who I am today and how did I find myself in the fortuitous position that I do today? The list is long, but between my folks and the KJ’s I shudder to think where I would be if I had not spent those dark nights running, listening, watching and absorbing what went on around me.

Kembla Joggers also has a great deal to answer for! My ability to understand and speak foreign languages is surely a result of the efforts I made to understand Bill Williamson as we ran around Mt Kembla at a pace where just keeping up was a challenge never mind holding a conversation with this passionate Irishman. My math improved as I learnt to keep tabs on how many laps I had completed around Lysaght Oval in one direction before I changed and ran the other way around! Imagine a runner not knowing and journaling exactly how far they had run and at what pace? I learnt to speak in the “kings” language of miles! I mean how far was 5km and who cared anyway when all I thought about was the 3 mile at West Dapto and taking as many older scalps as I could muster in the process. Handicapping, while always controversial with my older running mates was the thing that I loved the most, I am sure my subsequent passion on the bike, for going hard and chasing was at least 50% groomed in chasing down the runner in front and trying to keep those at bay from behind as we ran into the finish shoot in West Dapto. (The other 50% came at the hands of Ernie smashing me on the bike).

I guess ultimately I was acknowledge for running well (fast) and I was certainly gifted with a physiology and attitude that allowed me to do so. The things I was lucky enough to achieve as an athlete are now overshadowed by what I achieve in coaching others. The lessons I learnt whilst growing up in the Kembla Joggers family are ones I now practice daily in my professional and private life and whilst I may never have won a “Golden Boot”, I am sure that somewhere I still possess “the thong that had the prong”, a proud and unique trophy from my time at the KJ’s. Additionally, My Kembla Joggers money box courtesy of Bill is now full of coins from all of my travels and I could never have imagined where my running would ultimately take me.

I hope that the Kembla Joggers are half as proud to have me in the records as I am in having been and still feeling involved. Until “death do us part” and no matter where my career now takes me I will always be a Kembla Jogger.

Finally, as a future parent, I hope that the Kembla Joggers remains today what it was almost 30 years ago as this alone will give me reason to return to my native Wollongong and contribute to a great organisation.