Kerryn McCann (nee Hindmarsh) showed from an early age that she posessed the qualities required to become a champion when in 1979 she won the New South Wales Primary Schools Cross-Country Championships.

Kerryn’s association with Kembla Joggers started one year later, at age 12, where she is recorded in the annual Port to Kiama results (25.5km) completing the distance in 2 hours and 7 minutes. However, Kerryn stopped competitive running for a few years and picked up running again with her first marathon at the age of seventeen. At age 19 she ran the marathon at the Australian Championships, placing 3rd. 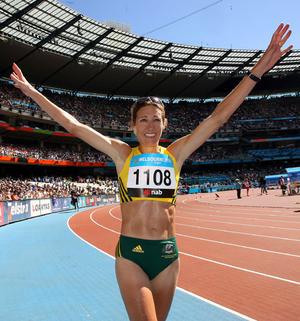 Kerryn took a break from professional competition for the birth of her first son Benton, returning in 1999. At the 2000 Summer Olympics in Sydney, Australia, Kerryn finished eleventh in the marathon. Later in the year she placed fifth in the London Marathon, in a time of 2:25.59, her personal best and an Australian record. She achieved a seventh place in the New York Marathon in 2002. Kerryn's best result in international competition came later in 2002 at the Commonwealth Games in Manchester, United Kingdom, where she won marathon gold ahead of fellow Australians, Krishna Stanton and Jackie Gallagher.

Kerryn again took a break from competition for the birth of her daughter Josie, before commencing training in late 2003 and returning to competition in 2004, competing in the 2004 Summer Olympics in Athens, Greece, finishing 31st in the marathon. In 2005, she won the 14 kilometre, City to Surf in a time of 46 minutes 27 seconds.

At the 2006 Commonwealth Games in Melbourne, Australia, at the age of thirty-eight, Kerryn defended her Commonwealth title, winning gold in the marathon in a time of 2:30:54, just two seconds ahead of Kenyan, Hellen Cherono Koskei. The time was her second best result ever in marathon. The lead changed six times in the final two kilometres of the race, before Kerryn pulled clear in the final two hundred metres around the athletics track inside the Melbourne Cricket Ground. Kerryn described the race as "probably the greatest victory I've ever had, or the greatest race I've ever run”.

Kerryn holds many KJ records, both track and cross country and it will take a superhuman athlete to break these. She is, undoubtedly, the greatest female distance runner that the Illawarra and probably, Australia, has ever produced.

Her untimely passing in December 2008 was hard felt by many in the club and the wider athletics fraternity. Kerryn's memory will long live on not only for her abilities as an athlete but also as a most modest, decent and humble human being. In her memory the club named the function room in the Kembla Joggers Clubhouse the "Kerryn McCann Room" and the Male and Female Elite Pointscore Championships also feature her name.