Dave Barnett has been a member of Kembla Joggers since the late 1970s when he ran regularly in club races at a very good level. His speciality was the Kembla Joggers half marathon which he completed in times as low 80 minutes. With his obvious stamina, Dave was always in the middle of the pack of runners only grudgingly conceded time and distance to faster runners particularly in handicap races. It is only in the last few years that Dave actually stopped running in club races. 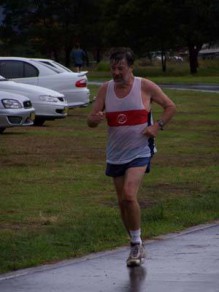 However the best of Dave is ”behind the scenes” where he was always encouraging other runners and sharing running tales with them. Typical of this was his legendary 25km match race with the late “sexy” Rexy Burrell over the 3 peaks of Mount Kembla (as documented in the KJ 25 Year Magazine of 1998).

During the 1990’s Dave was elected to the KJ General Committee on which he has been re-elected every year since and carried out various roles of Vice President, Marshall Co-ordinator, Public Officer and Chairman of Selectors for teams when KJs became affiliated with ANSW in 1998. His passion for KJ members’ involvement in ANSW races is unmatched.

Before the course opened in 2005 Dave was regularly part of the KJ Bushcare group which cleared unwanted bush and rubbish and replanted these areas with native trees. Since the clubhouse opened in 2010, Dave set about planting new trees which he had purchased at the Wollongong City Council plant sales. The grove of trees that Dave planted on the BlueScope side of the XC bridge is an amazing everlasting legacy for the club and is regularly commented on by visiting runners. It was for his tree planting efforts around the course generally that Dave was awarded KJ Clubperson of the Year in 2013.

Thus, after decades of dedicated unbroken service to the club in various Committee roles, club members voted unanimously at the December 2018 Annual General Meeting to award Life Membership of the club to Dave. He received his special life member’s badge at a post- race function in February 2019 to an enthusiastic response. Well done Dave – a KJ legend who still never stops giving to and supporting the club and its members.