Dave has been an active member of Kembla Joggers since 1987 and a committee member since 1995, giving him 24 years of continuous club membership and 12 years in an executive committee position. He has also been the KJ ANSW Registrar and Delegate since 2002 as well as being an ANSW technical official since 2006.

On top of all this, David is heavily involved in the organisation of a number of KJ hosted events such as the Fitness 5 Funrun and ANSW Road Relays. This does not include the work that goes his way year in, year out, for any club fundraisers and registrations. He has conducted all of this work in a no-nonsense and unconditional manner, meaning the volume of work he has completed often goes unnoticed. This is for both the Treasurer and Registrar roles. All of this work helps reinforce the positive club culture and stability we have. 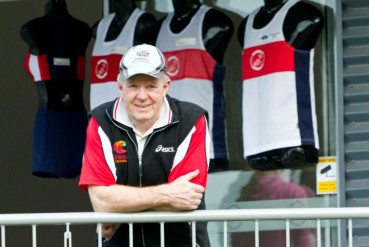 David has always actively supported the club and its members, especially our junior and elite talent. He has helped open doors for emerging athletes via ANSW as well as encouraged many juniors through his enthusiasm for the sport and the individual efforts of the juniors. We have witnessed on many occasions the positive effects David has had on juniors of all capabilities by showing an interest in them and knowing how they have performed or what events they have coming up. This has held the club in good stead for the future.

One of the most significant contributions David has had on the club has been his financial management of the Clubhouse project. The complexities of financial management of a million dollar plus project mixed with a not-for-profit group, Council and federal funding, GST and red tape that go along with it, are many and significant. His ability to maintain tight fiscal control has allowed the club to maximise the value of the funding to deliver the best possible outcomes for our clubhouse and our club.

The club managed to achieve all of its goals and more within the available budget with the books balanced to the dollar at the end of the $1.7m project. Also, shrewd use of funding freed up more funds than the club expected to have available. To have achieved all this is a significant result, to achieve it with limited knowledge/use of Accounting Software packages is something else and this is what David managed to do (he is getting better at MYOB we hear).

David is a tireless worker, club person and proud club member that has not only demonstrated a long term commitment to Kembla Joggers at the highest of levels, but has provided a significant, and exceptional contribution, to our club through his work on the Clubhouse, ANSW and athlete support. We are lucky to have him and proud to recognise him as a Life Member.