Most people when asked to write a profile start by talking about when they first met that person. However I can definitely not remember when I first met Eric. This is not a reflection on the powers of my failing memory but more a measure of the stature of the person who I am to profile. If ever anyone in the KJs had justification to push their achievements then that man is Eric Brown. Of all the KJs in the first 25 years he must rank top for the spread of athletic achievement and this from very modest beginnings.

As can be seen from his recorded times below, he posted veteran state level times in every distance from 100 metres to the marathon and threw in for good measure the long and high jumps.

His 400m and 800m times of 0.56 and 2.11 respectively would still make him a force to be reckoned with in KJ Open Championships and in these races he excelled in being placed at State Championship level. At the age of 48 he contested the World Vets Title in Melbourne and was the only KJ to record a PB there.

However, he may have developed a new method of tapering for the marathon as seen in 1984 when he ran at the State Vets Titles 100m, 200m, 400m, long and high jumps, and backed this up the following weekend when he ran the Canberra Marathon in 2.56 at 45 years of age.

While accomplishing these times, Eric took under his wing and coached what I feel was the best group of talented young runners to run with KJs and indeed all of the South Coast. Included in this group were his 3 daughters Nicky, Leslie and Karen, Leesa Bennett, the Baker twins, Wayne Barry and Tim Morrisey, ex Sydney Kings and Australian basketballer. All these runners ran at national level and undoubtedly owe most of their success to Eric's prowess at coaching. This ability remained with him as he continued to coach until about 2007. 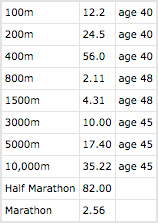 Eric was also a very able masseur whose expertise I have personally had occasion to benefit from when I had severe back troubles. His PBs are shown in the table to the right. Note that all the times with the exception of the half marathon and marathon are track times and not some nebulous road times as some runners often quote when relating PBs. His 3000m PB was set on a grass track!

Eric was instrumental in introducing the present Winter Series racing format to the Kembla Joggers. Before 1984 KJ events were held without any set format or structure. Both Eric and wife Hazel (see profile) took the time to develop and organise a well balanced racing program which became known as the Winter Pointscore Series. The first series kicked off in 1984 with only a handful of runners but quickly grew in popularity. The success of the Kembla Joggers today can be largely attributed to Eric and Hazel's foresight and dedication to make this concept work, which it obviously has. Many of the original courses are still used today. Eric continued as Race Organiser until 1989. He has also held a number of executive positions in Kembla Joggers including Club President in 1989 and many stints on the committee, including Vice President for many years. Eric was a major driving force behind the development of the Cross-County Park and was a stalwart organiser of the Thursday night track meets at Kerryn McCann Athletics Track (Beaton Park).

It was with great sadness that Eric passed away in April 2013, after a long battle with cancer. Never letting it get the better of him, Eric continued to take care of his beloved gardens at the clubhouse up to the week of his passing. His memory lives on through the club he helped build; it’s character, calibre of races and most importantly it's spirit were helped defined by our friend Eric.