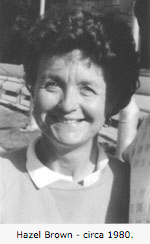 The success of a club, running or otherwise, is generally dependent on the quality of its officials and not its participants. Hence KJs has been extremely fortunate to have had Hazel Brown as an official.

During the period from joining KJs in 1978 till the present, Hazel has made herself available for almost any office associated with the KJs. Most of these positions have been those that others are usually reluctant to fill. Seldom has she missed a meeting or an AGM and the same can be said for her attendance at club races turning up in all sorts of inclement weather when even the most enthusiastic runner has second thoughts about running.

Along the way Hazel has accumulated a vast knowledge and expertise on running from local to state to national and international. She is a mine of information on times and can generally quote runners PBs and capabilities off the cuff. Indeed she has been known at the track to admonish participants who were not applying full effort.

When I was handicapper I was expected after finishing a race to tabulate finishing positions and times myself. It would be wrong for me to say I carried out these duties without saying that by the time I finished most races Hazel, who was supposed to just assist, had most of the results underway and it was only necessary for my signature so to speak.

I remember one occasion when we noticed the finishing recorder had listed a 'Thomas Kelly'. As both of us racked our brains for this new runner, it was Hazel who finally realised that what was intended was in fact the name of 'Tom Miskelly'!

Fortunately for KJs, in an organisational sense, Hazel contested only one race, the Gerringong Fun run. Hazel did jog for a period before finding her forte as official extraordinaire. For her contributions to the organisation of the club, in particular her joint efforts with husband Eric to establish the successful Winter Racing Series, Hazel was awarded life membership in the late 1980s.

In conclusion I would ask if you as a runner had all goals taken away from you, would you still be as enthusiastic as you are now. Perhaps you might last a couple of years and then find more attracting pursuits. Consider then that Hazel has been over 30 years with the Kembla Joggers and unlike the average jogger has no goals to achieve. Surely this is what is called true amateurism with a professional approach.