By Eric and Hazel Brown

Neil Barnett was awarded Life Membership of Kembla Joggers in 2002. He had then been Club President for 11 years. Taking on such a role at the young age of 23 was seen by some as unprecedented and questioned his inexperience. But after giving literally thousands of hours towards improving and expanding Kembla Joggers, Neil has guided the development of Kembla Joggers into one of the largest and most successful running clubs in Australia. In the first decade since taking up this role club membership had risen to over 400 annual registrations. He also brought a new look to the club in terms of professionalism and sponsorship. 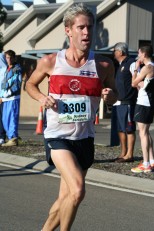 Neil’s unmistakable leadership abilities, vision and passion for the future development of Kembla Joggers brought a level of respect to the club in the athletics and fitness community to where we had been named Australian Athletic Club of the Year by Athletics Australia, NSW Athletic Country Club of the Year (several times) and the National Athletics Leadership Award. Much of the credit for this must go to Neil as he has had the energy and foresight to promote our club.

Kembla Joggers first Life Member, Bill Williamson, once said that the true value of a sporting organisation lies, not only in the quality of its athletes, but more importantly, in the dedication, enthusiasm and commitment of its officials. And how true is this of Neil.

Over the last few years Neil has been the driving force behind our clubhouse project. He was the one who coordinated the submissions to DEEWR for Federal Government funding and to the NSW Government and Wollongong City Council for additional funding. He chaired the KJ Steering Committee that over saw the planning and construction of the building of the clubhouse and the upgrade of the cross-country courses. He (in his spare time!) liaised with the various suppliers of building and course materials, and equipment, and is our representative on the Integral Energy Recreation Park Management Committee.

Neil has also been a very useful runner over the past 15 years. He has represented Kembla Joggers at NSW State Championships in track, road and cross-country. His best times include 3km track in 9.44, marathon in 2.51, half marathon in 76.11 and the City to Surf in 50.50 … a well rounded runner, although he seriously dislikes any distance shorter than 5km.

All of this has been done in addition to his role and responsibilities as club President, which he has now done for 19 years. All up he has been involved in very significant ways since hanging around as a junior in 1976. He is a true clubman and a most worthy Life Member.